The story takes place in the 1990's, revolving around a young, male virgin who experiments with sex and drugs.

This game is completely fictional and the characters are not based on any real people. The setting is based on a real time period, but that is also skewed, fantastical and exaggerated. The views, thoughts, actions, beliefs or philosophies of the characters in the story do not reflect the views of the author.

Woo! Look at that, we flipped over a full number version with this release. That on its own may not be very significant, though it does present a great opportunity to talk about how the game stretches out in terms of version numbers.
A few people have asked, does that mean we're 40% of the way through the story? The answer is no, and a better way to think about it, is the in-game time. The game is planned to play out over four weeks, in a structure that's similar to week one. Although there are a few elements that don't follow the conventional timing, one example of that is the RPG. So basically, the actual version numbers aren't very telling in terms of the development. If anyone has questions further to this, gimme a shout.
In this month's update, I hope you will be pleased to hear that Kate won the popular vote of our democratic process. The version notes are as follows below. 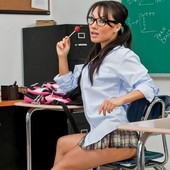